The cold weather means it is annual time again and (as reported in my 2007 Annual Inspection Report) I was so happy with the job Don Maxwell did that I made the decision to fly the plane down there for servicing.  Cashing in some miles to cover the round-trip ticket to and from Longview Texas helped ease the decision a bit, but Don does such a good job I would have done it anyway.  A quick call to Don to schedule the timing and purchasing tickets was all required.  The inspection shouldn't take all that long, but we allowed extra time (since I was buying a round trip ticket) in case any surprises popped up. 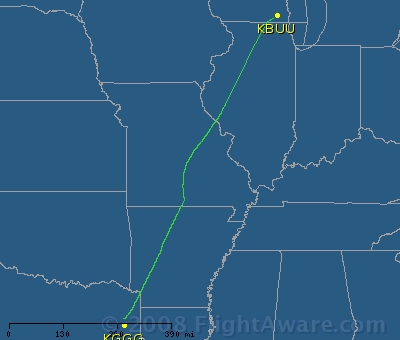 On a cold Monday morning (February 11th) I departed Waukegan with an outside temperature of -2 degrees Farenheiht.  Flew the plane up to Burlington (KBUU) to top off the fuel tanks (it is consistently the cheapest fuel around Chicago -- a city-owned airport that actually welcomes pilots) and I was headed South.  No real issues around Chicago and I was soon over a solid layer with tops around 12-13,000 feet but was looking closely at my Anywhere WX display due to the major storm system headed for Chicago and presently between me and Texas.

Unfortunately, I didn't take any pictures of the radar display that flight but the flight track map at left clearly shows the deviation I made to avoid the worst of the storm.  Fortunately the in-cockpit radar display helped me find a hole and work my way through the worst of the weather.  I continue to be amazed at the situational awareness this system brings to the cockpit.  The track really doesn't do it justice -- the storm line spread on a Northeast-Southwest line from Indiana to Oklahoma.  That slight curve to the West is actually me parallelling the worst of the storm until I could find a whole and punch through.  The point at which I turn back to the SSW and proceed direct KGGG is actually after I was clear of the storm line -- 70 miles of not fun flying!

Getting into Longview after that was a piece of cake and Don and his team were there to take custody of the plane and logs and give me a ride over to the commercial terminal for my American Eagle flight to DFW with a follow-on flight to O'Hare.  As you might expect, making the 1640 departure out of GGG was no problem on a regional propjet, what I was worried about was my connection at DFW.  Scheduled landing time was 1750 with an 1825 departure on an American MD-80 I knew would be in a different terminal at DFW.  Fortunately we made it to DFW a few minutes early (arriving at the gate around 1745) and I sprinted for the train to make my way to terminal A and my flight (which I fully expected was already boarding.  Anyone who knows anything about modern commercial air travel knows what I found once I ran up to gate A20 -- flight delayed, scheled departure time now 1930.  As I stood there thinking "at least I have time to get some dinner" the board updated to a 2000 scheduled departure time and I knew I had plenty of time to get dinner.  Reason for the delay -- ground stop for ORD arrivals due to low vis in Chicago (planes still flying in, but arrivals being delayed via flow control).  Just another reason General Aviation is so much better than the commercial airlines these days!  I finally made it to Chicago around 2150 -- five hours after my scheduled departure time from Longview and almost an hour longer than it takes to fly from Chicago to Longview by Mooney.  Did I mention I love my Mooney?  :-)

By Friday Don had finished the annual inspection and we now just needed some repairs completed (most of which were needed scheduled maintenance).  One of the speed brakes had been sticking in the "up" position and Precise Flight had determined they needed the 500 hour overhaul and installation of an upgrade kit that makes them more reliable.  The Oxygen tank was due for hyrdro.  The Magnetos were just 30 hours short of 500 hours and needed an inspection (which found they were fine and just needed some cleaning).  One tire needed replacement.  Only thing that wasn't a squawk I presented (but knew was a real possibility) was the requirement to replace all 12 spark plugs -- but 11 of them have been in the plane since I bought it so this wasn't much of a surprise anyway.

One thing Don found was an apparent mis-installation of the low-profile inner gear doors (cover most of the wheels/tires when the gear is retracted.  Since Mooney landing gear doesn't have an oleo (it uses shock disks instead) there is no way to check the gear door fit without putting the plane on jacks and retracting the gear.  What's embarrassing is the fact those doors have been on the plane since before I bought it and apparently no one doing an annual inspection has ever keyed in on the fact the doors weren't aligned and hanging open -- which would cause significant drag when airborne.  Don's attention to detail and insistence that things be right identified and fixed the problem.  He ended up having to drill new holes and totally remount one of the doors, the other required significant adjustment.  In our phone calls, he indicated I should see a noticable speed increase given how badly they were hanging out in the slipstream before. 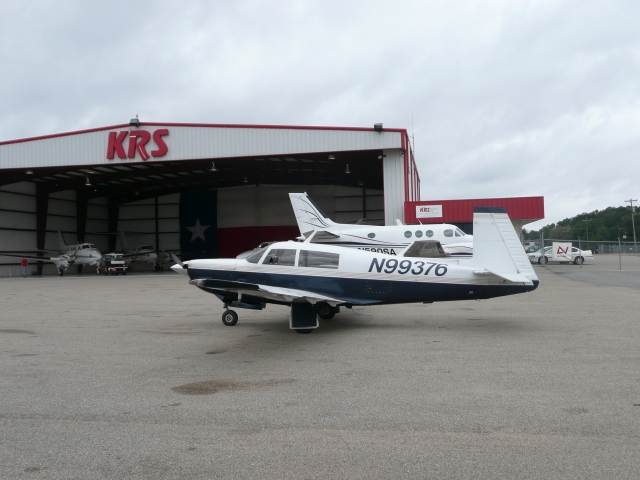 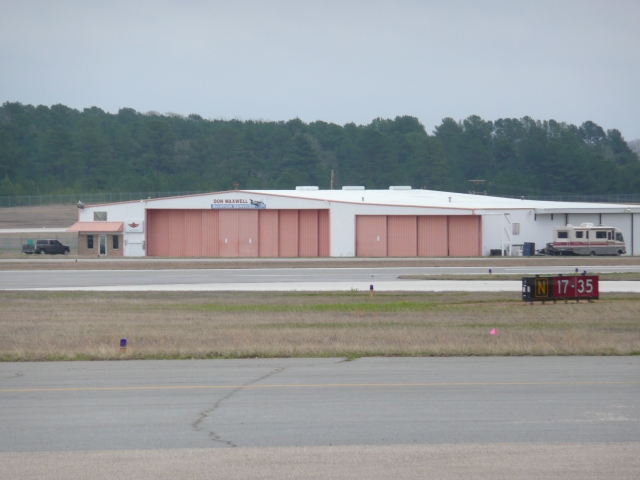 When it was time to pick up the plane we had some problems on both ends and the result was I would fly in on a weekend when Don was out in Phoenix for a Mooney technical seminar.  Being the class act he is, Don set it up so the plane would be waiting for me across the field at KRS Aviation (the Longview airport FBO).   So it was that on Sunday March 2nd I pulled up to KRS to see the plane waiting for me.

After a thorough preflight (I trust Don with my life, but I prefer to follow Ronald Reagan's advice -- "trust, but verify!") I finished my flight planning and got ready to go.  A quick look across the field showed Don's shop locked up tighter than a drum on a gray Sunday morning.   A review of the weather in KRS's nice flight planning and crew rest room showed I'd have a great tailwind the whole way home -- averaging at least a 30 knot tailwind most of the way so I planned for 17,000 feet and a 3:30 flight from East Texas Regional to Waukegan via the Texarkana (TXF) and Bradford (BDF) VORs.  There was a major storm system stretching from Western Oklahoma to the Dakotas with wind, rain, snow, and all kinds of nasty stuff, but I'd be flying well East of the line and get into Chicago well before the storms arrived.

The plane started up like a champ -- just about on the the first prop turn -- it may be those overhauled magnetos had something to do with it, and everything looked good for departure.  There was a solid layer at 1,800 feet but tops were at 4,000 and the outside air temperature was the warmest I've seen in a long time given the cold winter we're having up in Chicago.  The plane lept off the runway and soon I was above the clouds, looking at clear blue skies and cleared direct destination by Fort Worth Center. 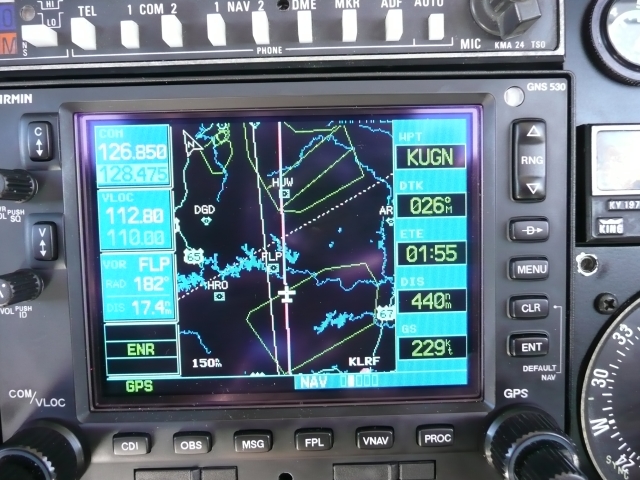 The tailwind was definitely present as I saw ground speeds exceeding 165 knots in climb.  At 13,000 it was time to go on the Oxygen (boy that Oxysaver cannula is comfortable and cuts down on bottle usage!) and I kept watching the ground speed increase.  About 25 minutes after departure (and a few steps in the climb for traffic) we were at 17,000 and the plane accelerated.  This was my first chance to get a feel for what difference the gear door alignment would have on the plane, and it was significant.  Normally I see high altitude cruise indicated airspeeds of 120-125KIAS, I was now seeing 140KIAS.  The true airspeed conversion worked out to between 175 and 180 KIAS.  Obviously this was only one look at one altitude and I'll watch this closely at various altitudes over the next few weeks, but it looks like I've picked up somewhere between 10-15 knots of airspeed simply by getting the doors aligned.  Certainly a great lesson and testament to the fact the best thing you can do to increase the plane's speed is eliminate drag!

As cruise continued, I watched groundspeed marking on the GNS-530W continue to climb.  Over the course of the trip I averaged around 220 kts groundspeed, but at one point hit 229 kts (263.5mph)...and got the picture to prove it!  Snapped that picture as I was approaching the Arkansas-Missouri border and you can see I had less than 2 hours from there to Waukegan at present cruise.  Of course (as is their want), as soon as Kansas City Center handed me over to Chicago Center I got the standard "99376, advise when ready to copy amended clearance."  Sure enough, it was JOT (Joliet VOR) direct VEENA (an intersection over Burlington Wisconsin, around 20-30 miles North of Waukegan) and radar vectors into Waukegan. 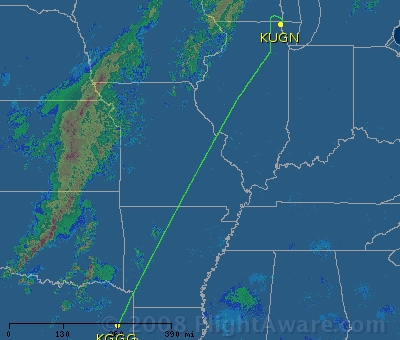 The controllers at Chicago are great, but it really is frustrating to be kept up high, West of the Class Bravo airspace and routed in a big loop.  They could easily drop me to between 4 and 8 thousand feed and take me right over Ohare or keep me west of Ohare and below the departures, but instead Chicago approach simply refuses to play with the small GA traffic unless it is going to a field inside their airspace, and I get the standard "Great Western Tour of Chicago".  Only adds around 15 minutes to the flight, but every time it happens I think about the major PR campaign the airlines conducted in support of user fees last year and their insistance that General Aviation is responsible for the delays and problems in the national aerospace system when in fact the system was designed to accomodoate the airlines and there is no question ATC's procedurs and policies expedite the flow of airline traffic while GA gets shuttled around to avoid any potential interference with the airlines.  I'd love to take one of the reporters writing articles supporting the airlines' position on a flight around Chicago and have him justify his "facts." The map at left shows the clear notch where I was vectored West of Chicago and looped back to Waukegan (as well as the storm system to my West).

All in all the flight time was 3:32.  By way of comparison, my commercial flight from Chicago to Dallas was scheduled for 2:30 with another 1:00 allotted for Dallas to Longview -- and I'm not including the time to get there to check in, go through security, wait for boarding, make the connection, etc.  Total door-to-door time was a 1545 scheduled departure from O'Hare with a 2026 scheduled arrival in Longview (4:41 not counting time at the airport before departure).  A Mooney really is a personal airliner and I'm happy I own mine every time I fly it!