One of the biggest revolutions in aviation in the last two or three years has been the introduction of weather in the cockpit received via uplink from ground stations or downlink from satellites.  In the battle between the two methods, satellite downlink seems to have won the war with downloads from XM radio's satellites being the leaders at present.  There are a number of systems presently available, and given the number of long cross country flights I do where knowledge of where the storms are located and how they are moving is useful, I started looking into the capability.  As far as hardware goes, it came down to one of three choices:

Further analysis led me to the PDA option due to cost...plus I already owned several PDAs and (if one was suitable) I would then save significant money on the purchase.  There are a number of different companies selling systems but I settled on Controlvision's AnywhereWX system, which was designed to run optimally on the HP Ipaq 4705 I already owned.  Software and the GPS and XM unit were still going to cost me around $800 when I found someone selling a used system (software, GPS and XM unit...he wanted to keep his PDA) via the internet.  Serendipity!  So last December for just under $300 I had a complete system (including yoke mount). 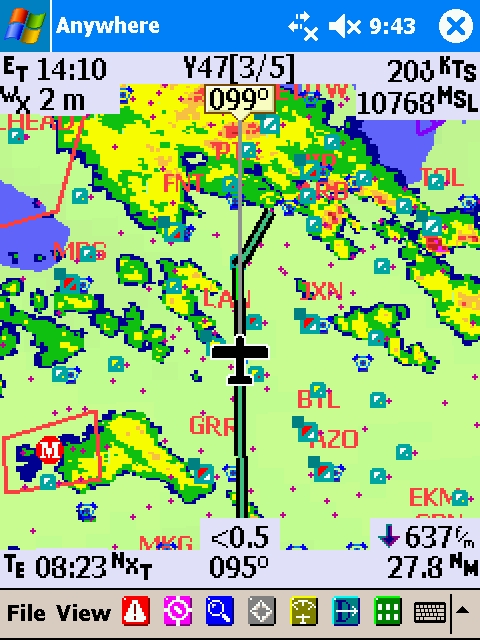 The image at right is an actual screen capture of a trip I took to Detroit in early May.  You can see the flightplan displayed in green.  At upper left is a timer and the age of weather data (2 minutes).  Upper center is waypoint information and track.  Upper right is GPS groundspeed and altitude.  Lower left shows time to next waypoint.  Lower center shows cross track error and leg course.  Lower right shows descent rate required to meet pre-programmed VNAV data and distance to next waypoint.

Of course the star of the image is what you see in the center.  Obviously you are looking at a NEXRAD radar image showing a storm with a number of cells around me, a big one behind me and a really big one up ahead (over Detroit).  Note the little boxes with a diagonal line bisecting them.  These are weather reporting stations. The upper left shows ceiling, lower right shows visibility.  The colors go from white to yellow to orange to red and equate to great VFR all the way down to low IFR.  It is easy to see that the airport right under JXN VOR (at the airplane's 2 o'clock position) has low ceilings but good vis.  Clicking on one of these boxes will actually bring up the station's METAR so you have all the weather data.

This image also shows the kind of situational awareness and flexibility this tool provides.  As I departed Waukegan for Detroit, I knew there were storms over and around Detroit but they were moving East.  I had plenty of fuel and planned to hold (if necessary) until the storm moved through.  As I headed East, the display clearly showed where the storm cells were so (even though I was in solid IMC) I knew the weather was OK as long as I avoided the storms.  As I got closer to Detroit, DTW was closed with planes holding due to the storm but I could clearly see that my destination (Y47) was already clear of the storm.  Shot a GPS approach breaking out around 800' AGL and got right into my field with no concerns because of the situational awareness this tool provided.

Another example is the animaed image below.  These are a series of screen captures on a flight from Millington back to Chicago in late May 2007.  Note that I could clearly see the thunderstorm line.  I could also see where the heaviest cells were (red) and where there was a thin spot in the line with only moderate green and yellow precipitation.  As a result, I was able to start deviating to the right early to set myself up for a successful (and safe) penetration of the stormline.  Of course I had to be mindful of the delay in weather uplink, but I was clear of clouds and could see which buildups corresponded to which cells.  When I finally went into the clouds, I had confidence as to what I would expect and (equally importantly) how quickly I would be out the other side (note that I range in the scale as I get closer to the storm giving me a better picture of exactly where the weather is; you can also see how much time elapsed and how early I was able to make my decision on how to deviate to penetrate by looking at the flight timer at upper left). I've penetrated lines like this before with ATC giving me assistance and trying to steer me towards areas of lesser intensity, but that doesn't give you nearly as much situational awareness as seeing the weather yourself!

Much has been discussed about the uplink delay (weather data is sometimes as much as 7 minutes old) and the fact this tool is useful for strategic storm avoidance and not tactical decisonmaking (as compared to an onboard radar).  I think the truth is a little better than this.  Clearly awareness of what the weather is up ahead (hundreds of miles ahead in many cases) from both TAFS, METARS and seeing the storms is useful in making strategic decisions including which way to deviate if necessary.  But when working through a line of storms the system can also be used to know (roughly) where the bad stuff is and conversely, where the good weather (or at least better weather) is.  Now that I have used this for six months I look back at some of the flying I've done over the last 15 years and wonder at how unaware I was of what was going on around me.  I really think this is almost as revolutionary to flying as GPS...and certainly wouldn't go on a cross country without it now!