Once again this Mooney proved its utility.  There was a change of command scheduled in Kansas City on November 22nd.  When we looked at attending we had the following options:

The event was scheduled to start at 1000.  There were no commercial flights that would permit flying down that morning and returning the same day (meaning we would incur the additional cost of an overnight stay in Kansas City).  Length of drive also meant the only way to do it was to drive down on the 21st and spend the night in Kansas City (as well as being out of the office on the 21st as well to drive down).  By Mooney we could leave early in the morning, arrive in time for the event and fly back that afternoon.

The event was downtown so a little research determined that KMKC, located right across the river from downtown Kansas City and only about a 10 minute drive away from the event) was the place to go.  For comparison purposes, Kansas City International (KMCI) is about 30 miles NW of downtown...  A quick call to the FBO confirmed that their courtesy cars were first come, first served but that a lineman could certainly drive us to the event (saving us the hassle of figuring out where we were going as well as finding parking).

Weather showed cold with a scattered layer at about 10,000 so we prepped for a 0630 departure.  In the air by 0645 and was able to get cleared direct KMKC from Rockford Approach once West of the Chicago Class B airspace.  It was quite hazy but generally clear skies and was able to fly right past Moline, IL with Davenport, IA right across the Mississippi river.  Got these shots of the river as we cut the corner in Iowa... 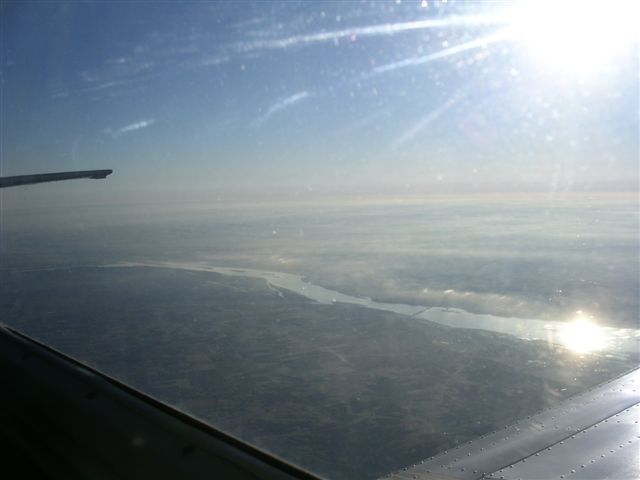 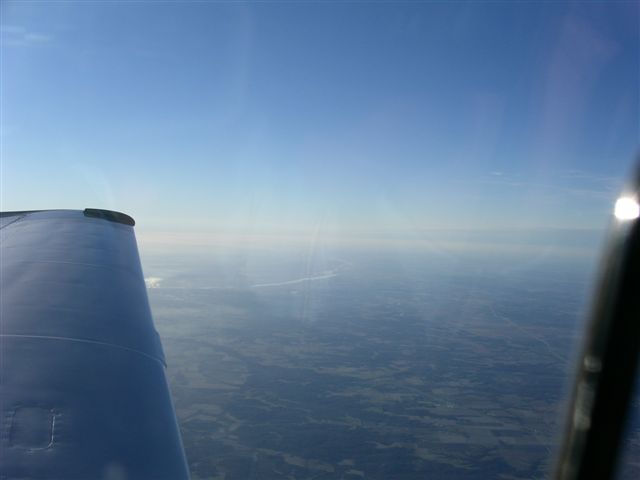 While the temperature was quite cold outside (about -15 degrees C) it was actually quite warm in the plane.  The cabin heater puts out a nice stream of warm air at the base of the console on the aircraft centerline and the sun beating through the plexiglass really warms up the cockpit.  A lesson I learned on previous flights is that the sun can become so bright and warm it gets uncomfortable.  When my 8 year old son was a baby, we had a tinted piece of plastic we could push against the car window (it would just adhere to the glass) to act as a mobile sunshade.  In the 9 months I've owned this plane I still haven't found one of those...but I am buying the first one I see...

Has about a 10 knot tailwind going down, but a really wicked crosswind...crab angle was almost 40 degrees!  As we got closer to Kansas City we were given vectors East of the city and told to expect the visual to runway 1.  Really great as it would take us right over downtown.  My passenger had his digital camera out and got some shots...it is a very pretty approach as you fly right in over downtown KC at about 2000 feet descending until you land just past the downtown buildings!  Picture below shows downtown KC as we approached from the East on an extended Base leg.  Airport is at right edge of picture just across river (you can just see the runway threshold if you look closely in the first picture and the airport runways/taxiways are quite clear in the second). 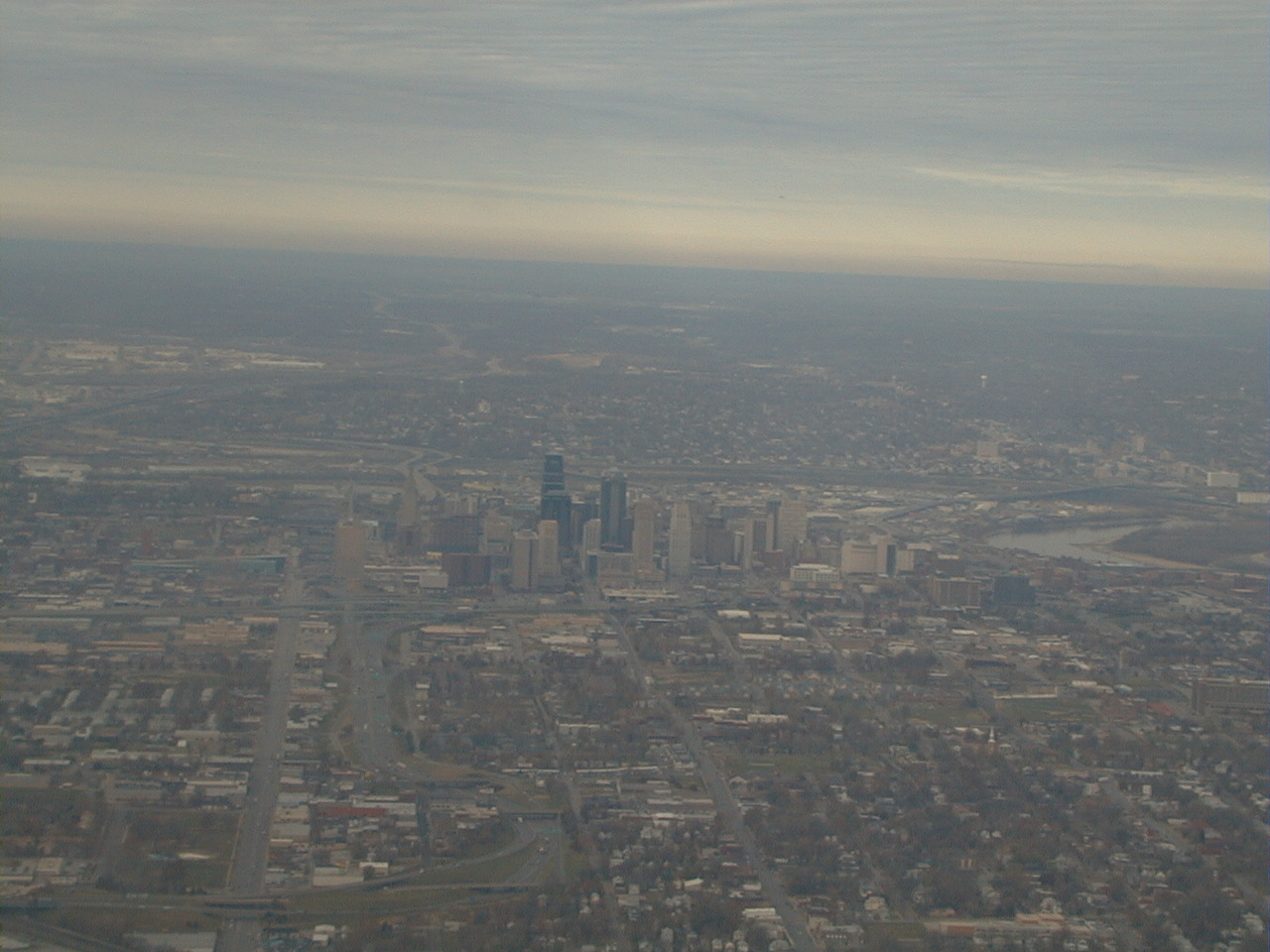 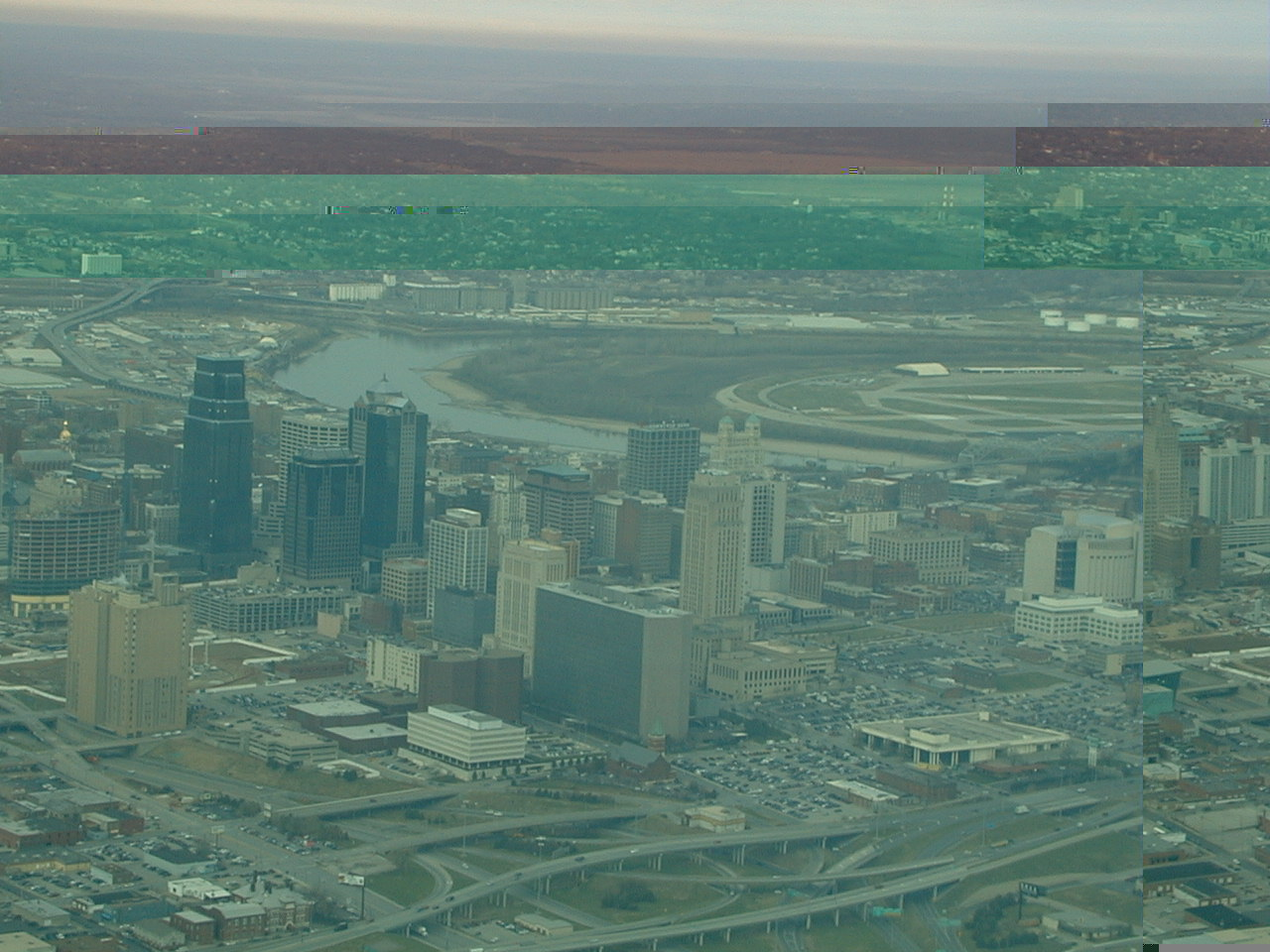 Made the turn onto final and my passenger got these neat shots (shot on right was just crossing the runway threshold and he wanted to show his handheld GPS...I was just gratifed we were on the glideslope!): 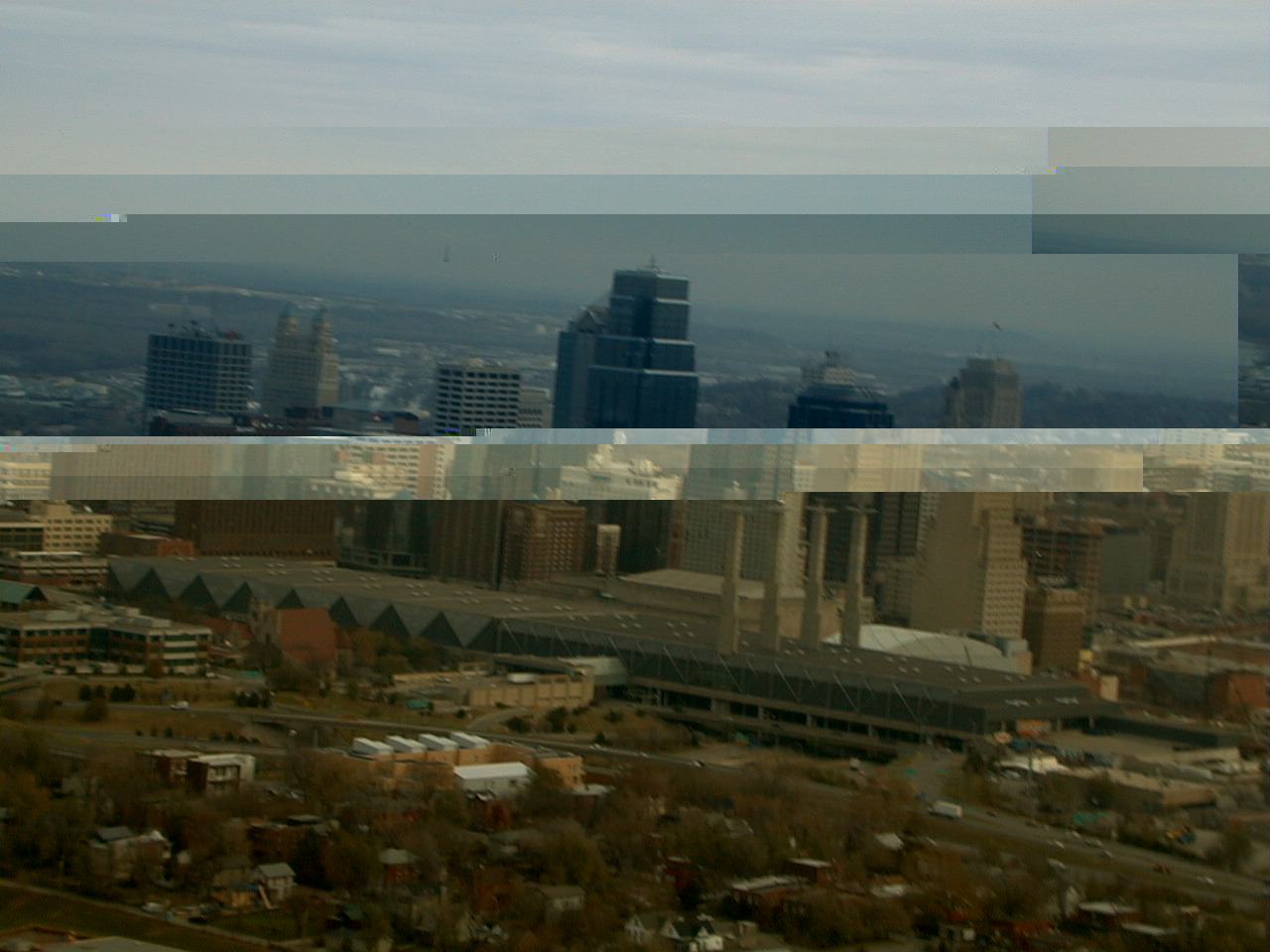 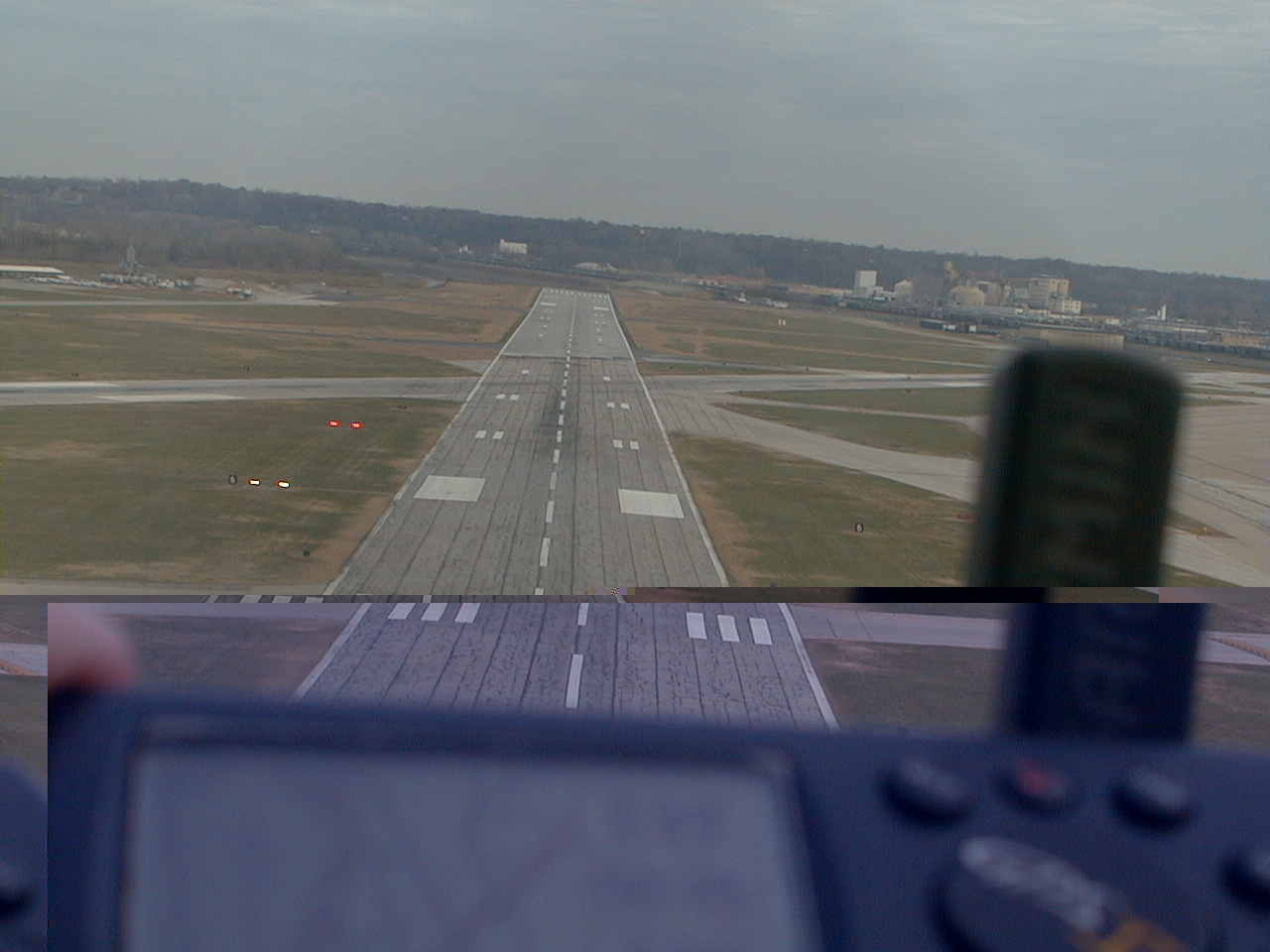 FBO service was outstanding (although they are very pricey on gas...over a dollar a gallon more expensive than what I pay in Waukegan).  After checking in at the desk (they were expecting us and had received the FBO notification fax from fltplan.com, I remembered I left something in the plane and went out to get it.  Plane had already been towed farther down the line to make room for all the bizjets.  Oh well, still beats flying into an airport farther from town...  Quickly changed into our uniforms and then were driven to the Liberty Memorial for the event.  Back at the airport by 1230, changed back into more comfortable clothes and we were ready to go. 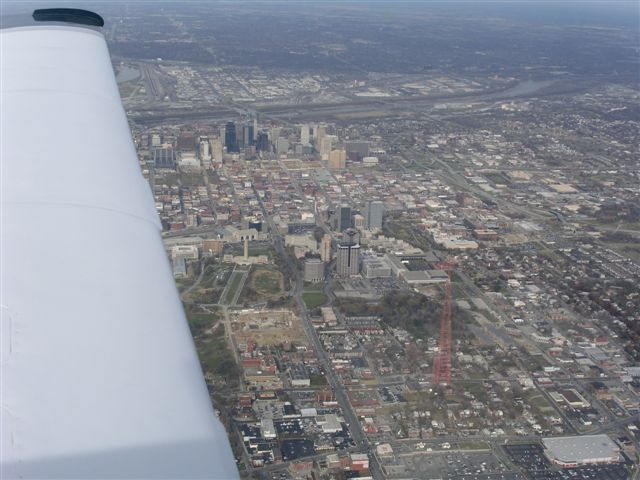 Tower had our clearance ready and we were set to depart from runway 21.  Took downtown down the left side and then were given a turn to 090 at 3,000 feet.  Got this nice shot of the downtown area after turning.  You can see the Liberty Memorial just forward of the wing about halfway up the picture...it's the park with two gray parallel roads leading to a sand colored structure with a thin tower rising from the center.  You can also just make out KMKC.  Look at the loop in the river just forward of the wind near the outer end.  Directly below that is the airport...what a location!

My passenger has the ability to download the GPS track and display it graphically on a satellite map.  Pretty neat actually.  Below is that image showing our track on both arrival and departure.  The leg with all the dots on it was our inbound track...you can see us come in from the East and then make the turn to the North to land on runway 1 and then turnoff and taxi to the FBO at the Southern portion of the field on the East side.  Taxi to and takeoff from runway 21 are visible in the leg with no dots on it.  You can clearly see they flew us a bit farther to the South of downtown, had us fly East for a bit and then that turn to the North-Northwest that took us by the football stadium.  Wish I could do this with my GNS-530! 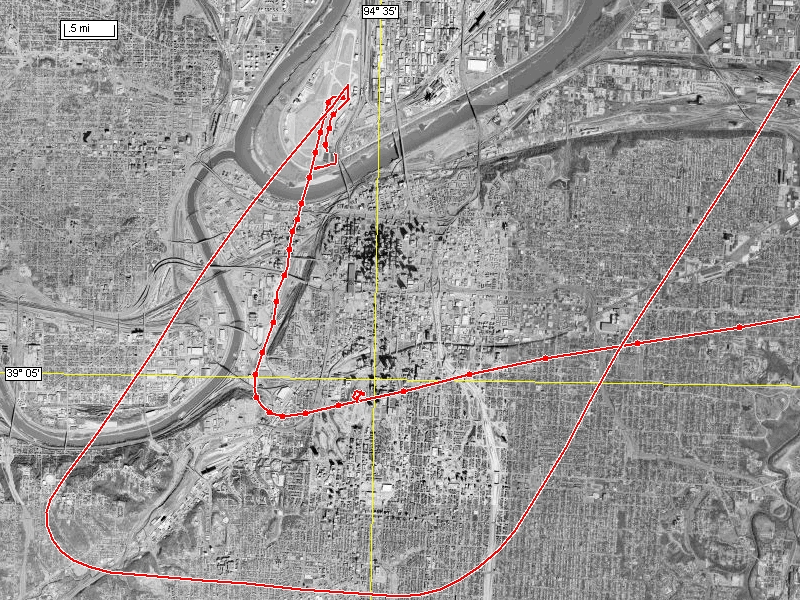 Once we got East of downtown we were vectored North to join the SID.  Got this shot of the Kansas City Chiefs stadium. 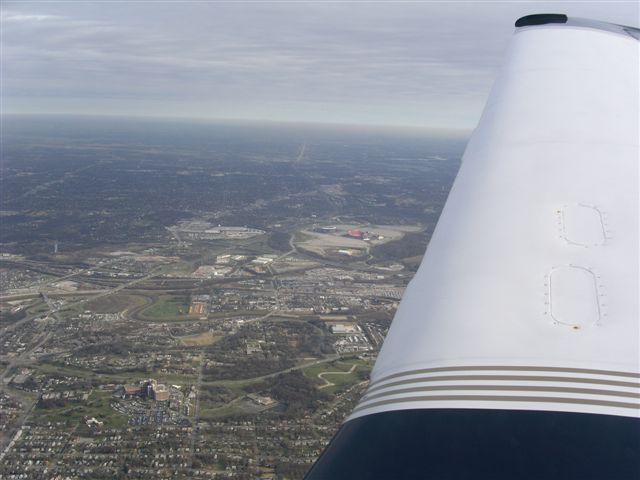 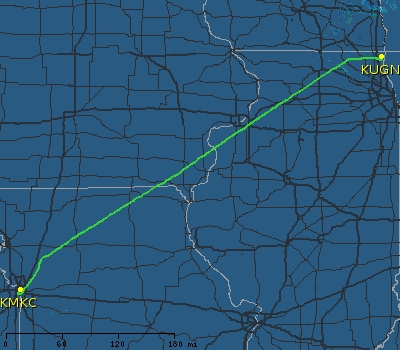 After that it was a climb to 11,000 feet and Direct Waukegan.  Had
about a 15 knot headwind slowing us down but not really that big of a deal.  Spent almost half the trip in clouds or between layers with no discernable horizon but we just watched the miles tick off on the GPS.  Got my usual clearance modification after checking in with Chicago Center...this time it was direct KRENA intersection then direct Waukegan.  While still some 60 miles West of Chicago, Rockford Approach had us descend down to 6,000 feet which was a bit disconcerting.  I requested higher until we got closer in and was told I would be descending to 6,000 so I didn't argue.  Did get a nice view of Rockford airport from 5,000 feet as we went by.  Shot the visual into 32 at Waukegan and was back.  Total return flight time was 2:29...not too shabby!  We were on the ground at 1553 local. In my last trip report I mentioned the utility of flightaware.com.  Here is the map track of the completed flight home based on ATC radar tracks...

Bottom line...left Chicago in the morning, spent about 3 hours in Kansas City and was back in Chicago by 4 pm!  That will keep a Mooney smile on anyone's face.