Had to go to Denver on busness for a four day conference and it was a perfect opportunity to get another long-range flight in 99376.  This was the farthest west I've ever flown (as you can tell by looking at the map on teh homepage) and my first opportunity to deal with the summer thunderheads the great plains are famous for.  Weather between Waukegan and Denver was predicted to be prety darn good with "isolated" thunderstorms.  Hah!  Looking for Denver guidance on the Mooney mail list had put me in touch with Dave Burry who was willing to loan me a hangar at Jeffco Airport (KBJC) while in Denver to protect the plane from any hail storms.  As fuel at Jeffco is quite expensive, on Dave's recommendation, I planned a fuel stop at Platte Valley Airpark (18V) about 20 miles northest of Jeffco where the fuel was much cheaper.  With headwinds only 15 knots at altitude, I flight planned for FL180 to maximize true airspeed and wring out the new Merlyn wastegate installation.

Plan was to fly UGN-JVL-HCT-18V.  Of course, we all know about plans...  While over Iowa I was told FL180 was no longer available due to low altimeter settings and I had the choice of FL200 or dropping down to 16,000 feet.  Really didn's want to go on the mask and the increased oxygen usage, so I elected to descend to 16K.  As I approached western Iowa the stormscope was picking up activity ahead and a check with flight watch confirmed there was a major line of thunderstorms around North Platte VOR stretching to the south.  Recommendation was to deviate to the North where conditions were clearer.  This image of my track clearly shows the deviation to the Northwest and then North in central Nebraska to get around the storms before I finally was able to turn southeast and direct 18V. 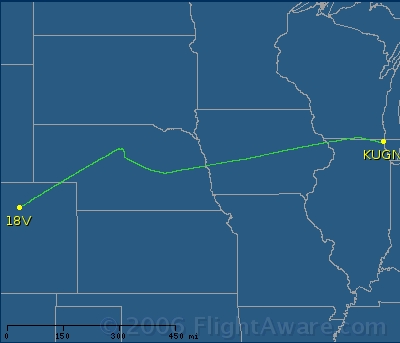 It was at this point that I was truly wishing I had the GDL-69 or Garmin 396 with NEXRAD radar so I could see the cells for myself.  As I worked my way around the storms Flight Watch and ATC both told me the cells were to my left and conditions were OK ahead.  Boy were they wrong!  Snapped this image as I was workign my way around what I thought was the northernmost thunderstrom...

Looks like a good setup right?  Clear skies and sun with a well defined cell to the left?  Not so fast...punching through a little cloud about 20 minutes after I took this picture I was caught in an updraft that took me up to 18,000 feet while I was picking up a lot of ice.  Windshield was completely obscured and I could see the buildup on the wings heavier than I 've ever seen it before.  Got out of the updraft and told ATC I needed to get down below the freezing level (it was at 12K) ASAP to get rid of the ice.  Started the descent and popped out of that little innocous looking cloud in about 3 minutes...but they were a long three minutes and it sure felt good when the ice began to melt off as I passed below 12K.  Funny thing is that after I passed through that cloud things were perfectly clear and sunny with a well-defined line of thunderstorms behind me stretchign to the South.  While I don't know for sure, I think that cloud I flew into was a thunderstorm in the early stages of development.  Nothing on the stormscope and no one saw anything there on radar but it taught me a valuable lesson about even avoiding the innocent lookign clouds when near a line of storms like this... 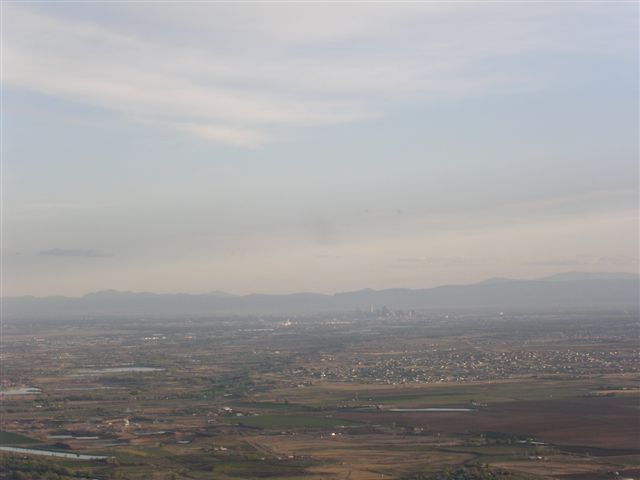 As I approached Denver the ground below me rapidly climbed to meet me (I eventually climbed back up to 12K) and I got this nice shot of downtown Denver with the mountains in the background as I was approaching Platte Valley airport...

Refueling was a piece of cake and then it was on to Jeffco and the lovely hangar Dave made available to me.  What a hangar -- heated (obviously off now in the summer), insulated, a bathroom and a shower.  I could live there!  Certainly much nicer than my hangar back in Waukegan and I am truly envious of Dave.

Unfortunately, my plans changed and I had to fly back the next day so I wasn't able to enjoy as much of Denver as I had hoped.  Instead it was a 1600 departure with some predictions for major tailwinds (upwards of 45 knots) and a planned 4:30 flight time at 17,000.  Weather?  Same as the day before wtih a line of thunderstorms over central Nebraska and Kansas moving slowly to the East.  With that in mind, I filed for HCT-JVL planning on deviating to the north around the storms as I got closer to them.  Sure enough, ran into the clouds over eastern Colorodo and could clearly see some big storms ahead.  Got permission from ATC and climbed up to FL190 so I would be above the layer and visually able to see the thunderstorm cells.  A check with Flight Watch indicated there was a major cell over North Platte and then a clear area with the line of cells in the vicinity of Grand Island and stretching to the south.  Both Flight Watch and ATC recommended taking the cell at North Platte to the North and then (once past it) turning to the Northeast to leave the other cells to my South.  Could clearly see the thunderheads and this is what I saw right after making the turn. 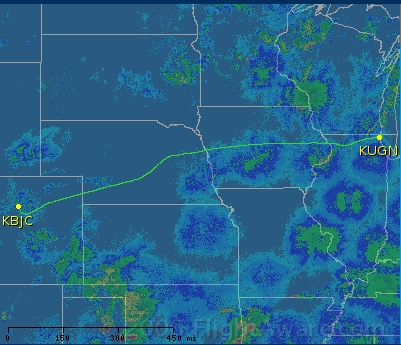 Who says you can't teach an old dog new tricks? The clear area was perfectly benign and I shot through that patch of haze in about 20 seconds and was then in clear skies and able to visually see all the buildups.  Skirted the storm over Grankd Island as was direct UGN.  Checked in with Flight Watch and he indicated the only weather ahead of me was an east-west line of cells to the North of my flight path.  I could clearly see them off the left side and enjoyed the weather, tailwind and smooth ride as the sun set with all stroms behind me...  Arrival into Chicago was uneventful with a layer over the city and a slight deviation direct Rockford-KRENNA-UGN to fit me into the traffic flow.  Total flight time?  4 hours 29 minutes!  All in all a great trip.  Just wish I had been able to stay in Denver longer and enjoy the mountains and the opportunity to visit my brother in Phoenix (only 3.5 hours away by Mooney!).  Map to the right shows my actual track (disregard the weather, got the image off flightaware the day after the trip...you can rest assured the thunderstorms where right where you can see that deviation to the left!