Got a chance to take my first long flight alone and at altitude using the installed factory oxygen and an oxysaver cannual I had purchased.  Had to take a trip to Chicago to do an inspection on the house we're building there.  Could have flown Southwest via Indianapolis or Independence Air via Washington Dulles, but it would have only saved me about $50 over and an hour over flying myself.  Besides, this is why I bought the Mooney!

Planned on departing around 1200 on Monday the 25th.  For a number of reasons, I didn't get airborne until almost 1400.  Went directly to St. Augustine (KSGJ) to gas up (self-serve was 3.89/gal at CRG, 2.61/gal at SGJ and I needed about 50 gal to topoff.  There was a cold front coming in from the West, so I knew I'd have 35-45 kt headwinds for most of the trip up and had searched on Airnav for a cheap fuel stop.  Settled on Greencastle/Putnam County, IN (K4I7) as they had the cheapest gas around and I wanted full tanks before I hit Chicago's airspace (I'd heard stories about vectors from hell).

After fueling up, I got my clearance (as filed) from SGJ ground and headed out.  Planned route of flight was

Was routed to the coast and then North and cleared to climb up to 10K.  Got this shot of the coast once I was in the climb and on autopilot.  You can see Ponte Vedra Beach in the foreground and Jacksonville Beach in the distance. 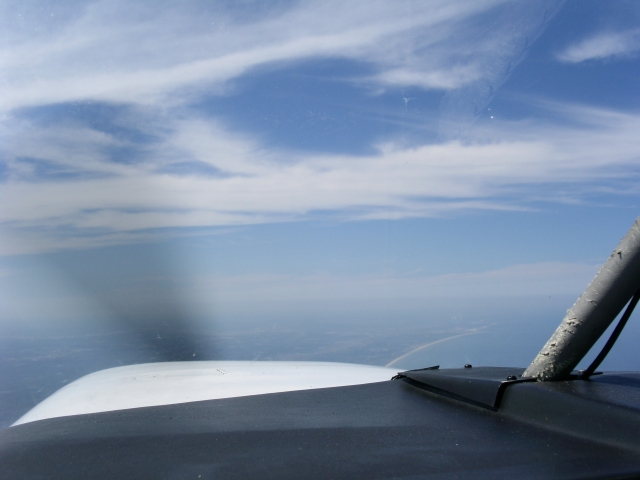 Got this short of SGJ looking back right after I made the turn North. 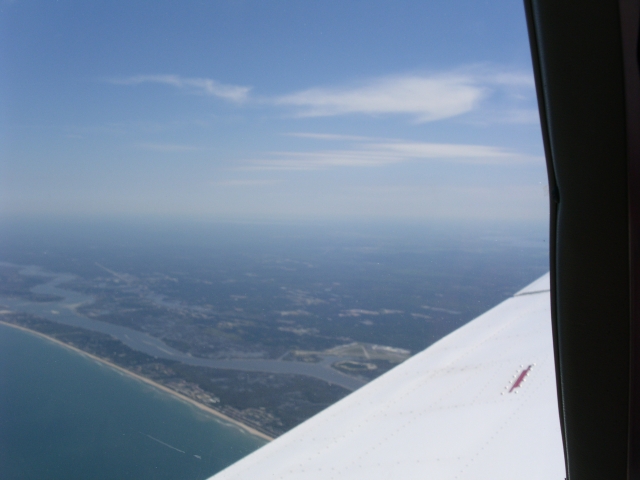 And this short of Naval Station Mayport (where I'm stationed) as I passed over Jacksonville (you can make out the USS JOHN F KENNEDY at the pier). 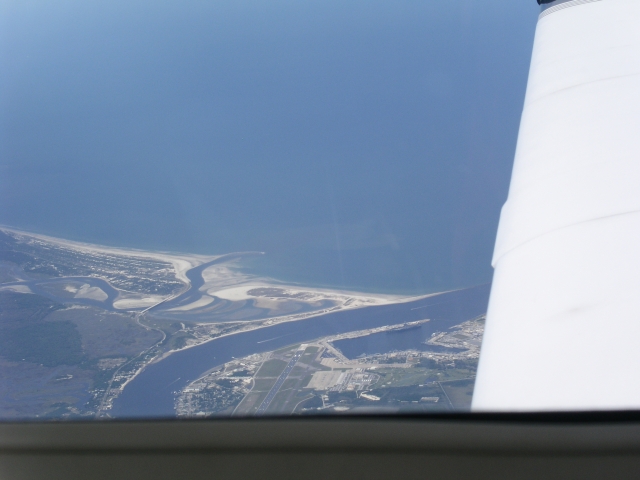 Flight to 4I7 was uneventful.   Climbed to FL180 as planned, but the headwinds were stronger than I expected.  Ended up flying at around 14K for most of the flight.  Cannula was very comfortable and I forgot I had it on most of the time.  Oxygen usage was minimal and I only used 200 psi of O2 for the entire leg.  Landed ad 4I7 just 5.1 hours (0.6 IFR) after departure with a GPS RNAV rwy 18 approach.  Nice long 5000' runway and no problems.  Discovered that the FBO (Dixe Choppers) refers to the fact they make high-tech lawn mowers, not a helicopter service as I had imagined).  The company had been featured on an episode of American Chopper when the boys from OCC made them a bike.  Neat pictures and a mower on display in the lobby!  Restaurant was closed, so I fueld up and headed North, picking up my IFR clearance right after takeoff.  Route of flight was:

As I neared Chicago airspace, Center told me that I had one of three choices:

It was getting dark, I was tired, and I didn't want to mess with being out over a dark lake on my first trip into Chicago so I elected for option 3.  I promptly was told to descend to 6K and was given vectors steering me Northwest.  Tried to get some shots as the city lights were spectacular.  Unfortunately my digital camera didn't have the aperature speed to get a decent shot and I ended up with blurry images.  Below are the best of a bad bunch.  Image at left is taken from WSW of downtown and shows the city grid.  Image at right is O'Hare taken from 4,000' and truly doesn't do it justice.  The view was spectacular! 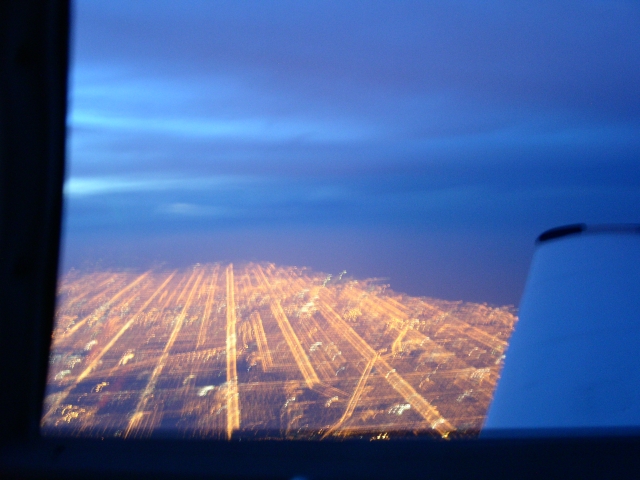 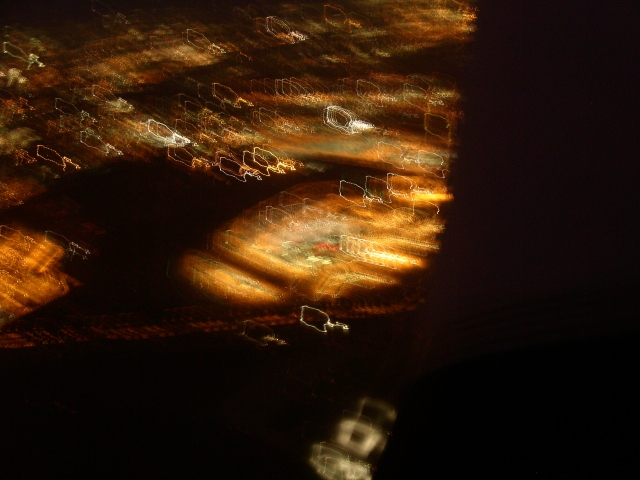 After passing over O'Hare I was given vectors out over the lake for the ILS 23 approach into Waukeegan.  Tower had already closed for the night so it was simply a matter of dialing up the ILS, cancelling IFR once I had the field in sight, and heading in.  I did fly a coupled approach until I was 500' AGL as I was getting bounced around quite a bit over the lake and it was tough enough flying!

After arrival, the folks at DB aviation were just great.  Josh (the line supervisor) had arranged for me to borrow a courtesy car overnight since I was leaving early the next day.  The line team was excellent, pulled the car right around and the desk attendant was very professional.  I am almost certainly going to base my plane here when we move up to Chicago this summer.

After taking care of the meeting I had Tuesday morning, I got to Waukeegan airport by 1130.

Wanted to pull the upper cowl and check something on the engine so Josh kindly had them pull the plane into an immaculate hangar so I could work clear of the winds.  20 minutes later I had the plane buttoned up and was ready to start flight planning.  The flight home was what I was most concerned about on this trip.  The weather showed a cold front with rain and isolated thunderstorms stretching from Pennsylvania/Ohio down to Mississippi.  Illinois and Indiana were already behind the front so I made the decision to launch  and head South to a place where I could get cheap fuel and look at the weather again before deciding whether to spend the night there or press on for Jacksonville.  A quick search on AirNav determined that Scott County Airport, Tennessee (KSCX) was an ideal location.  Front was just passing over it, cheap gas, a GPS approach into the runway, and I could always divert to KTCH which had an ILS approach if I couldn't get into Scott.  Next decision was how to get out and avoid getting the grand tour of Chicago from ATC.  Talked to some guys at DB Aviation and made the decision to launch VFR, fly the Lakeshore visual under the Class B and then pick up my IFR clearance once South of Chicago Airspace (in the vicinity of Gary, Indiana).  Weather was 4-5K overcast, light winds so this seemed like a good plan.  Picture at right shows what the national NEXRAD radar showed as I planned the flgiht.  As you can see, the front is already to the East of Chicago.

Departed Waukeegan as planned and was immediately cleared to head South for the lake shore.  Once over the water, I leveled off at 1,500' (about 800' above the water) and followed the shore South, using the Garmin GNS-530 map to ensure I was below the airspace.  Got some great shots of the Chicago downtown skyline as I went by.... 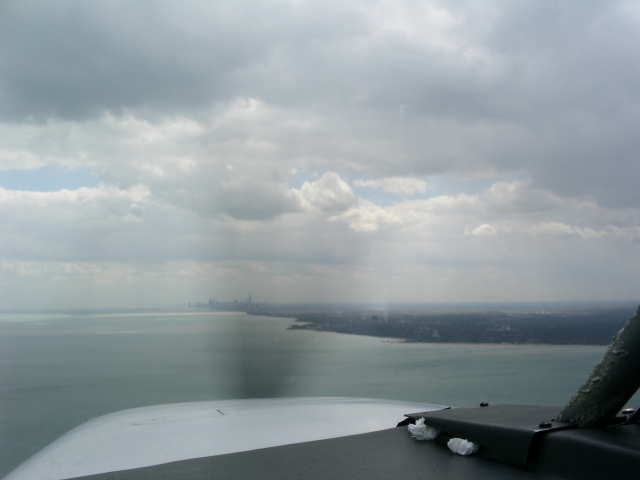 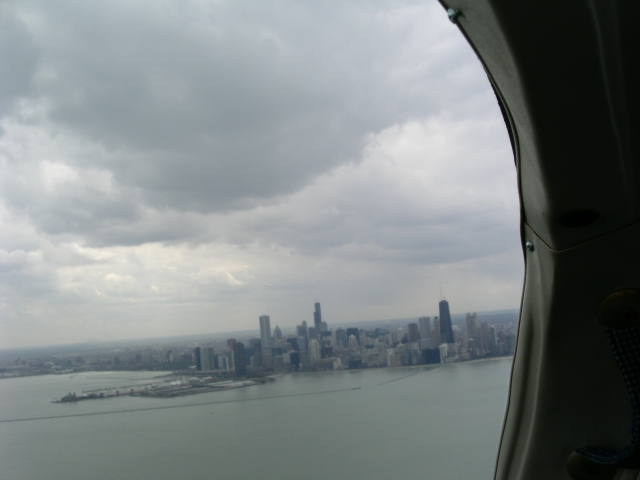 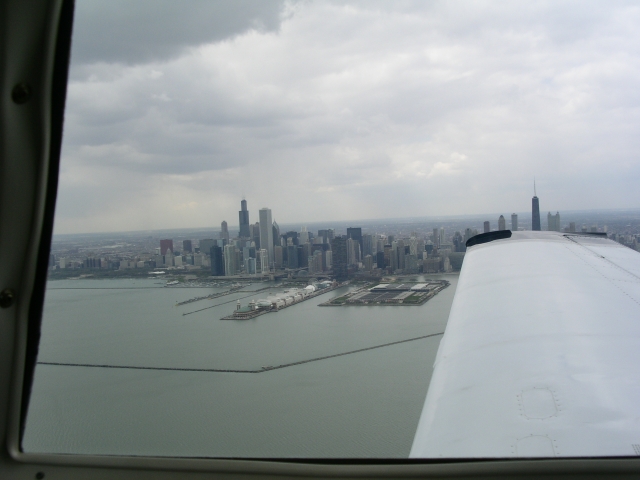 Plan worked like a charm!  After passing the Southern shore of Lake Michigan, I popped up, called Chicago Approach and activated the IFR clearance.  I had filed for 11,000' but picked up some ice.  Tops were right above me, so I climbed to 13K to get on top and out of the clouds/ice.  Here are some shots of the ice I picked up... 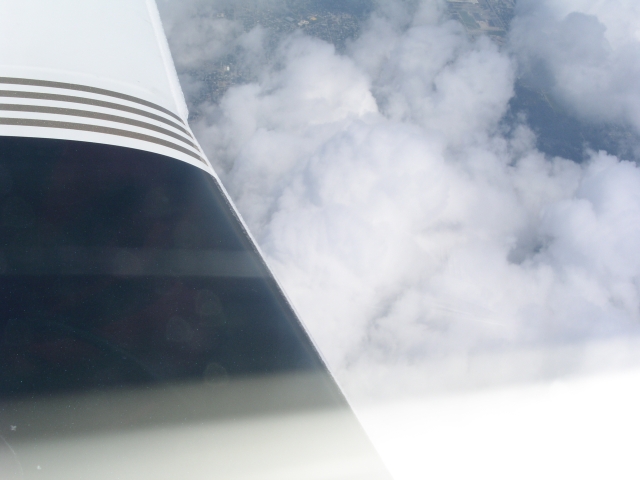 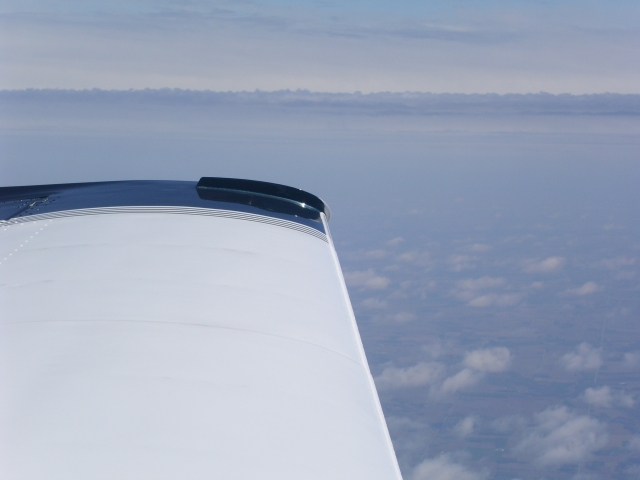 Once on top, I had no problems, the ice melted off and I headed

on course.  Near Indianapolis I was cleared direct SCX and headed on my way.  As I got closer, I tuned up the AWOS and determined they had a 1000' ceiling and winds at 11 kts, almost straight down the runway.  I elected to shoot the GPS RNAV approach to 23 and it was a good thing as I broke out at 500' AGL.  Landed on a very wet runway and made my way to the FBO.  The airport manager was kind enough to fuel me while I called the FSS and cancelled the IFR flight plan.  After topping off I took a look at the radar (still looking ugly over Georgia) and then borrowed a courtesy van to grab some dinner.  Due to the time zone change it was already 1700.  Was back at the airport by 1740 and thinking about headed due South to Tallahassee, land to look at the radar, then follow the front into Jacksonville.  Image at right is what I was seeing as I made this decision...

When I called the flight service station briefer, he told me that the really bad stuff was all well out to sea or to the South and recommended I fly SCX-MCN (Macon, GA)-CRG and either work my way through the front with ATC assistance or land when I got there.  Filed for that, got an IFR release and was quickly airborne.  I had filed for 13K and was quickly on top of the clouds and in pretty good VFR on top conditions.  Here are some shots of what I saw. 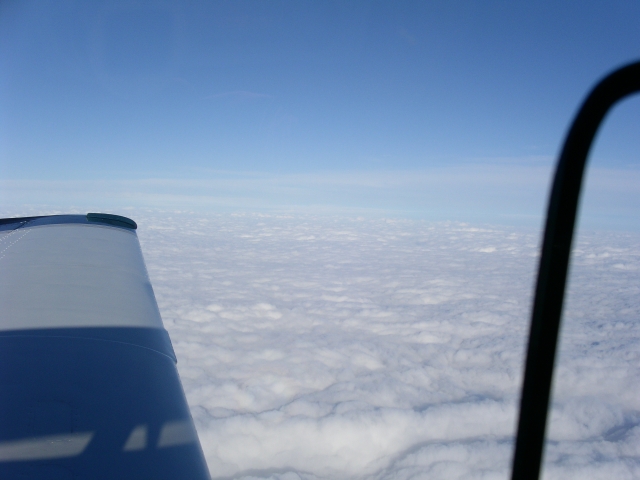 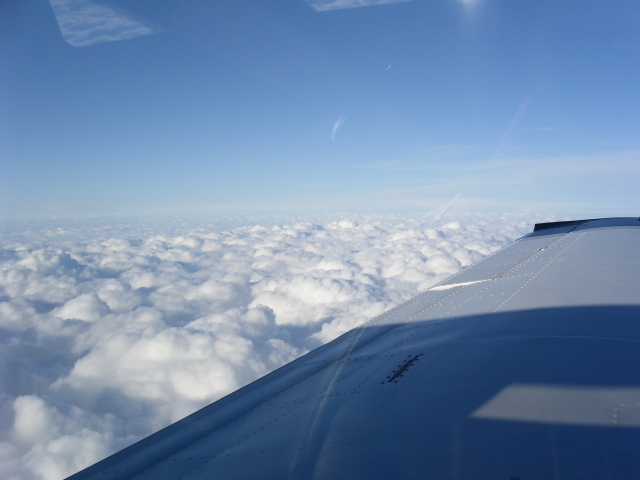 I had to climb up to 15K at one point to clear some clouds, but never saw any thunderstoms and it was a pretty easy flight.  As I passed Atlanta I called Macon radio twice and confirmed the thunderstorms were all out to sea or on a line between Daytona and Orlando -- well South of where I was going.  With that information, I pressed on and then let down through the clouds as I neared Jacksonville.  Broke out at about 6,000' about 15 miles Northwest of Jacksonville International and then shot a visual into Craig.  Total flight time for both legs was 6.0 hours with 3.2 hours of IFR.  Not bad considering the headwinds I fought!  All in all it proved the utility of the Mooney 231 and the flexibility the IFR rating gave me since I was able to press on with a "take a look" apporach and a plan to get down if the weather wasn't conducive to going one.  I feel this trip more than any other I have completed demonstrated my ability to complete a flight in less than optimum conditions.