Shortly after I got the plane we had to take a trip to Houston on short notice for a family emergency.  Our first chance to test out the new plane's legs!  We did look at airline options, Southwest was cheapest by still $265/person round trip and we were talking 4 people (my wife, 8 year old son, 2 year old daughter and me)...clearly flying in the plane was the cost-effective way to go (and a lot more fun for me).  In preparation for the trip I did a couple of things: 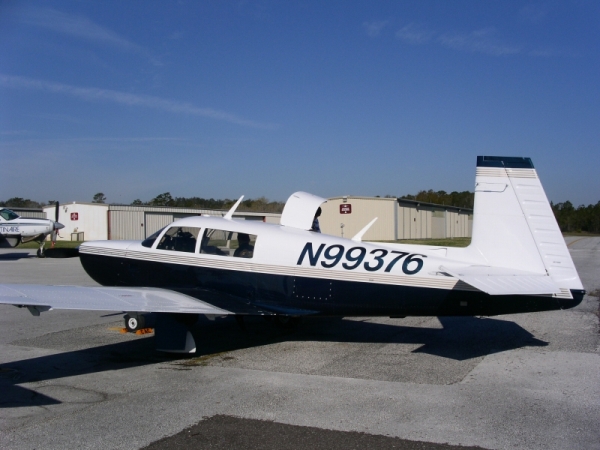 Day of departure dawned wtih beautiful weather.  There was a cold front passing over Alabama and the western part of the FL panhandle so I new we'd have a few bumps and some clouds as we flew through it, but after that it was looking like sever IFR.  Filed the flight plan on Duat and headed for the airport where I learned lesson #1: "When flying with family, if possible, the pilot should go to the airport ahead of time with the luggage, load and preflight the plane, and be ready for immediate departure when your wife and young children show up!"  Took us about 30 minutes to be loaded and ready to go...baby seat fit on the rear bench with no problem and things were looking good.  Here's a shot Kim took as I loaded the baggage.

With everything loaded, got the engine started, loaded the flight plan and called clearance delivery for the IFR clearance.  Was cleared as filed and headed for the runway.  After finishing the run-up checks, we tried to put the earmuffs on Lauren (the baby)...she wore them, kind of.  Took off and headed  West at 8000' due to that ugly headwind...  About 30 minutes into the flight the baby started crying.  My wife did all the things you do when in a car wtih a crying baby...not much success and we learned lesson #2: "Flying in a small plane, while faster, has the major disadvantage of not being able to pull over if the baby is really upset!"  Fortunately, the ANR headsets blocked out most of the screaming/crying and she settled down (pretty much) after about 20 minutes.  While over Eglin AFB I requested and was able to get GPS direct KHSA which took about 15-20 minutes off the trip.  Not much, but every little bit helps with an unhappy baby!  Cold front passage wasmarked by about 15-20 minutes of light turbulence and we were in solid IFR for about 40 minutes...basically about 1000-2000 feet above the ceiling with tops about 3-4K above us, but this was not the time to mess with oxygen!  Below are some pictures of Mobile Bay, AL and Pascagoula, MS I snapped (we were just coming out of the clouds over Mobile and were past the front by Pascagoula).. 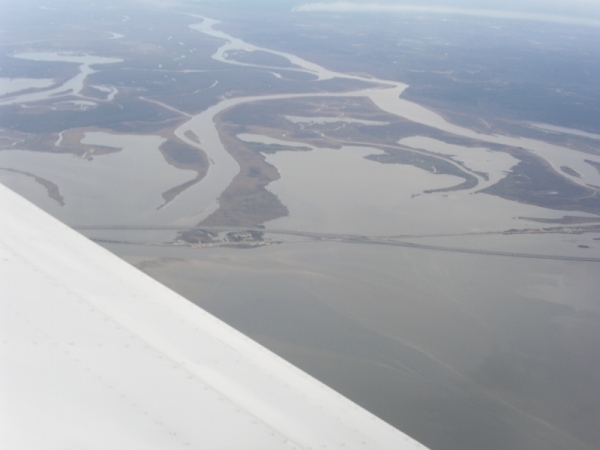 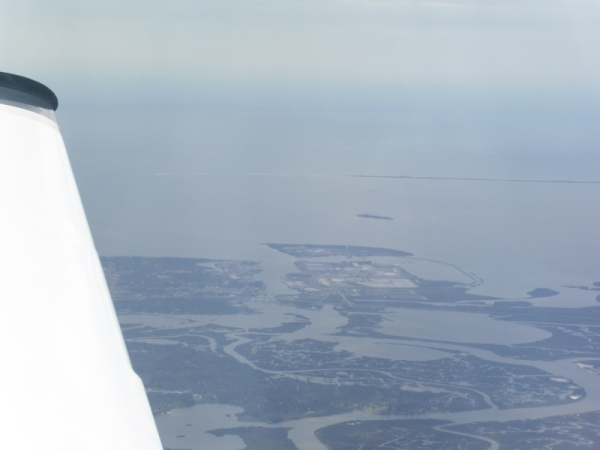 Landing at Bay St. Louis was uneventful (although we did get bounced around a bit between 1500 feet and landing...those high winds!  Total flight time 3.8 hours for an average groundspeed of 110 kts.  I had generally seen 110-120 on the Garmin over this leg and I was very, very appreciative of the fact I wasn't flying a Cessna or Piper.  FPO had a courtesy car for us and we headed into town to get some lunch while they topped the tanks off.  Given the state the kids were in, we ate at McDonalds and they both played in the playground while Kim and I ate...we figured the kids would eat their Happy Meals once we were in the air.  After returning the car, getting everybody settled (includign the pain of removing the baby's car seat to install in courtesy car then reinstalling in the Mooney, we were airborne.  While the baby tends to throw things (includig food) in our minivan, she gave new meaning to it here as McNuggets, fries and her puff snack crackers were dumped all over the rear seat and floor.  Oh joy...then we gave her the sippy cup and learned Lesson #3: "Sippy cups filled at near sea-level become pressurized and spray milk everywhere when used at 8,000 feet!"  Now I had milk all over the interior as well as the left rear window.  Good news was the headwinds were decreasing slightly.  Our route took us right over Lake Pochetrain with a great view of New Orleans and the Mississippi off the left side, but Kim was sleeping and I couldn't get the camera without waking her. 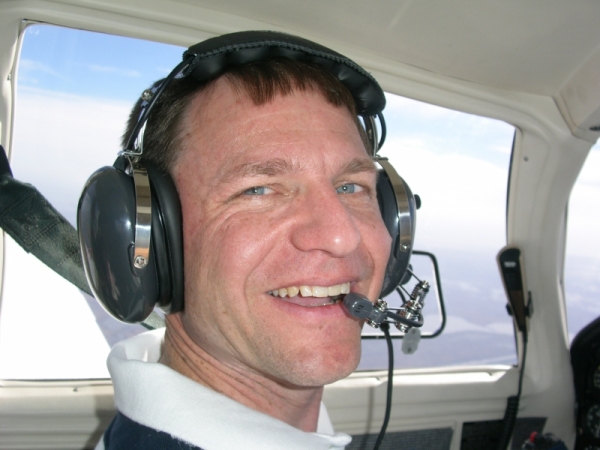 Near Lafayette I was asked if we coud accept a STAR into the Houston area.  I proudly replied I could, copied down the amended clearance and added it to the flight plan with the GNS-530's handy "Proc" button.  Man I love this unit!  Best thing was the STAR had us flying right over Houston Hobby airport so we'd have a great view of the airport and downtown Houston as we approached Sugarland Regional.  Weather just kept getting better and Kim woke up as we neared Lake Charles, LA.  Thsi is a photo she got of one smiling Mooney owner!

As we passed Beaumont, TX I got a hind of what Houston Approach had in store for me as we began radar vectors...towards Galveston!  After a delightful tour of Galveston Bay we proceeded Southwest (the airport was WNW of our position) and could not even see the Houston skyline.  Looking at the Garmin, it was clear the controller was keeping us outside of the Class C airspace and sure enough we were slowly turned to the West and then Northwest, just skirting the edge of the Class C airspace.  Quite different than my experiences in the DC area, Norfolk, and throughout Florida.  I'm guessing they just didn't want GA traffic near the jet trafic moving in and out of KIAH and KHOU, but I wasn't impressed and was sorely tempted to cancel IFR and go straight to Sugarland VFR except for the Haze (I saw almost none of the traffic the controller was pointing out to me). 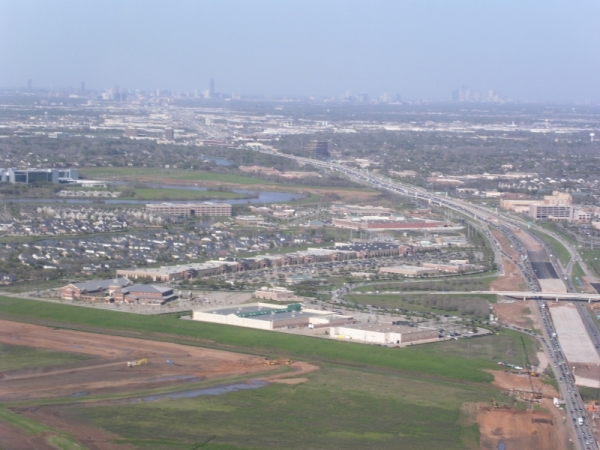 We were finally about 20 miles South of SGR and cleared to turn North and proceed straight in for the runway.  I tuned up the ILS and figured I'd use it as a crutch as we closed in and the Garmin again worked perfectly.  Kim got the shot at right as we were descending through 2000 feet just before hell broke loose.  Once again as we descended things got bumpy.  Passing through 1500' AGL, the baby began crying uncontrollably.  At 500' AGL, she threw up and our son began calling out the things you would expect an eight year old to call out.  I'm quite proud of the fact I was able to tune it all out and concentrate on getting us safely on the ground.  As we taxied to the terminal I had visions of what condition the back of the plane was in...  :-(

The lineboy directed us right in front fo the terminal.  Turbo cooldown timer was at 3 minutes since landing, but engine had been at low power for a good while on descent and the family was in no shape to sit there for 2 more minutes while we waited for the timer to run out so I shut her down.  Kim got out, Doug got out, and then I was able to get the baby out and hand her down to Kim.  The back seat looked like...well if you have any kind of imagination or experience with kids, you know what it looked like.  What a way for the trip to go.  Kim changed the baby, I unloaded luggage and the lineboy got our rental car and drove it right onto the line and next to the plane and then loaded the luggage for us.  Kim was impressed...you don't get this kind of service with the airlines!  After requesting the plane be tied down and fueled for a Sunday departure, we hopped in the rental car and headed into town.  Total flight time for this 331 mile leg was 2.7 hours for an average GS of 123kts.  Jacksonville to Houston in 6.5 hours flight time...not spectacular, but still pretty respectable with those headwinds.  I was looking forward to the flight home and hoping the winds didn't shift. 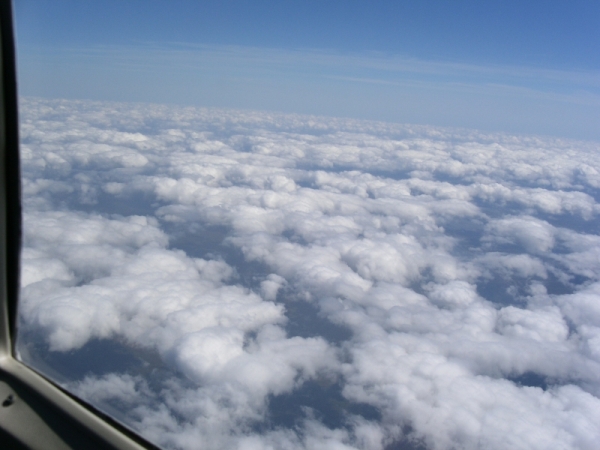 Sunday morning came around with another beautiful day...50-60 kts out of the West all the way to Jacksonville.  A layer at 8-10 K over most of Louisiana and Mississippi and then clear VFR all the way to Florida.  After getting everybody loaded in, we called clearance delivery and headed for the runway.  While waiting for our IFR release (had to wait about 6 minutes) we watched a Citation depart and learned how hot a Mooney can get in Texas in the sunshine...I kept assuring Kim things would cool down once we got up to altitude.  To take advantage of the winds, I had filed for 13K, virtually the reverse of our inbound route.  Predicted flight time was 4:20.  As we passed 8K on our way up to 13K the Garmin GS really started to pick up adn I saw it exceed 200, then 210, then 220 and I started smiling.  As we made landfall in Louisiana, the cloud layer started to come in (picture at right).  We were now making 255kts Groundspeed with an estimated total flight time SGR to CRG of 3:55. 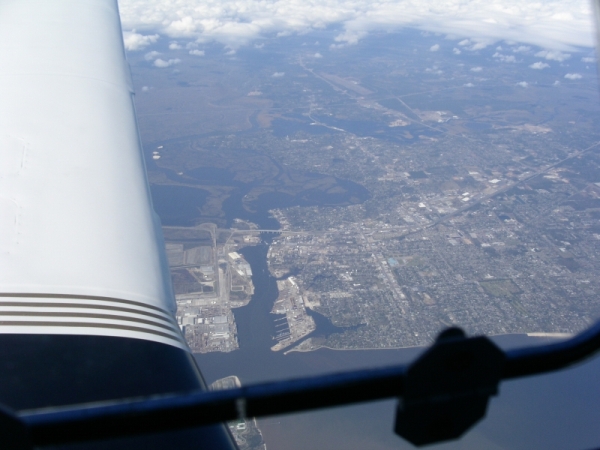 I snapped this shot of Pascagoula and approached Mobile just before I learned Lesson #4 - "No bathrooms in small planes when traveling wtih your family can make for unplanned stops!"  With an urgent need for a bathroom and concerned about the descent I'd have to make, I changed my flight plan to Pensacola and started the descent.  Those speedbrakes sure came in useful as we descended at 1200 fpm until I learned Lesson #5 - "Babies don't like fast descents..." as the baby began crying and pulling at her ears.  Slowed the descent rate to 500 fpm and tried to get setup for the landing.  Because the runway 8/26 was closed for repairs, I'd be landing on runway 17 with a 20 gusting to 30 knot crosswind.  Came in fast with 3/4 flaps and bounced my way down the runway hoping to avoid a propstrike.  Probably my worst landing in the plane to date, but I was happy just to be on the ground safely with no damage to family or plane!  We pulled up to Pensacola Aviation Center and the girls at the desk were quite understanding once we explained we didn't need gas or a tiedown, just a quick bathroom break.  Given all the MOAS and ranges between Pensacola and Craig, I filed a quick flight plan with the Flight Service Station and we were back in the plane 20 minutes after shutting down.  Departure was another experience as the plane kept wanting to slide to the left despite full right rudder to counteract the crosswind.  Got airborne and headed East.  Total flight time from SGR to PNS was 2.6 hours for the 450 mile flight for an average GS of 173 kts -- this was why we bought the Mooney!.  Kim got these shots of Pensacola as we climbed out of the airport. 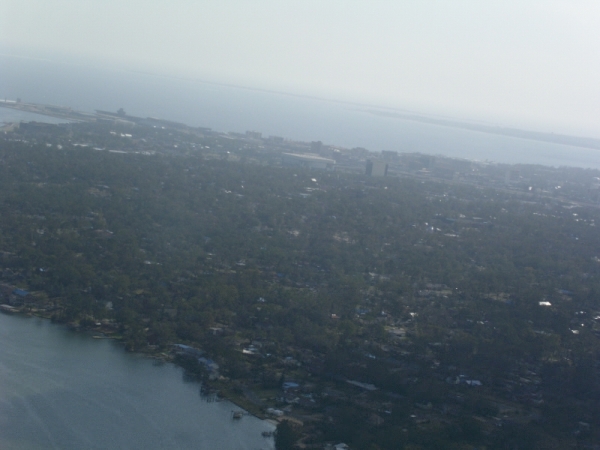 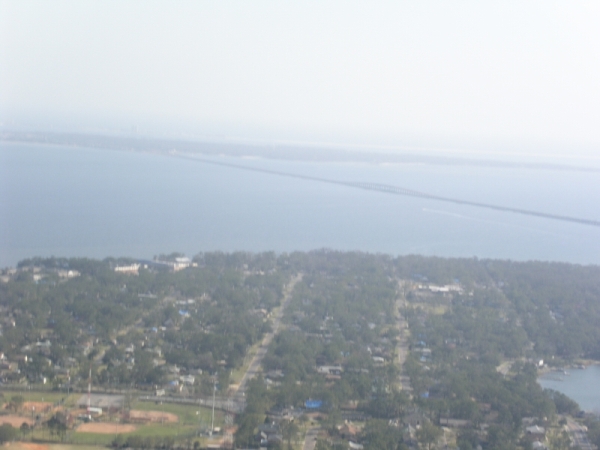 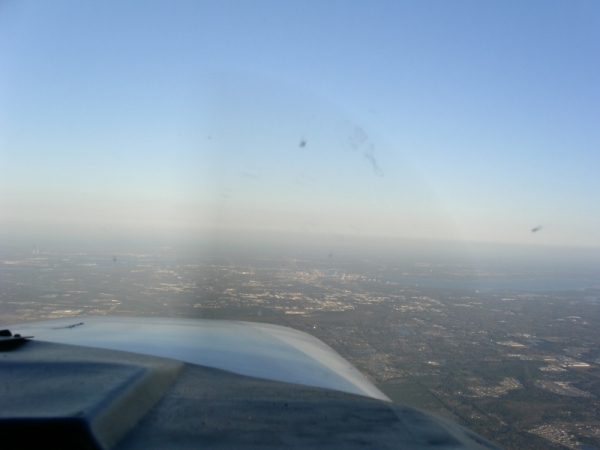 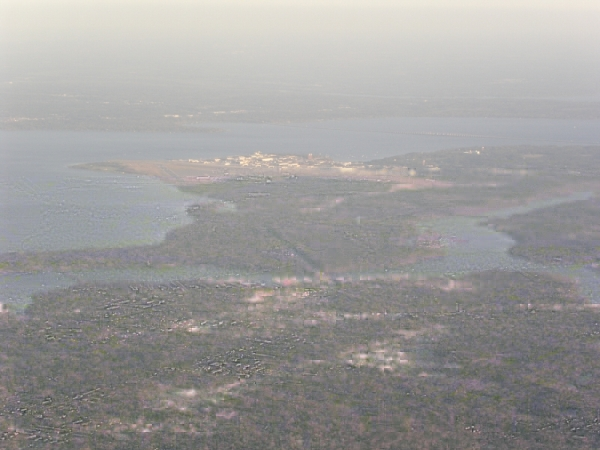 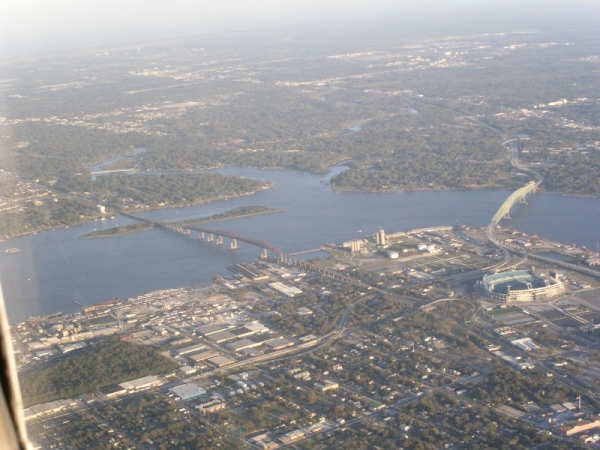 Digital camera battery died out and we swore to carry more spare batteries in the future.  Landing was uneventful just 1.7 hours after leaving Pensacola (177 kts GS!).  Total flight time from SGR to CRG was 4.3 hours, 4.8 hours actual clock time due to the diversion and time on ground at Pensacola.  Not shabby at all and faster than an airliner unless you could get a non-stop Houston to Jacksonville flight.  While not perfect, we learned a number of good lessons on this trip and the plane lived up to its reputation.

In debriefing the trip, Km and I came to the conclusion the baby is just a little too young for long flights in the plane.  She doesn't like to wear the earmuffs and doesn't understand why she has to.  I think we'll be holding off on long trips for at least a year or so until we can be assured of avoiding the screaming baby syndrome.