This was my first annual with the plane. Even though we had done a pre-buy by a Moooney Service Center, reports from various folks on the Mooney mail list prepared me for the worst. I fully expected to find things and have issues. I already had developed my personal squawk list of things I wanted repaired/worked on and planned to assist in the annual as much as possible by taking a week's leave and helping the mechanics. Truly no better way to learn about your plane than seeing it worked on....

Annual started by flying the plane for 1/2 an hour to ge the temps up and then taxing straight to Waukegan Avionics (WAI), the on-field repair station at Waukegan. True to form, they were waiting for me, the hangar doors were opened to get the plane inside, and they then immediately pulled the cowl to do compression checks. Kirk Swannick (lead A&P at WAI) has worked on Mooneys before and followed all the checklists and guidance from Mooney in conducting the annual.

I had decided to install the Merlyn automatic wastegate, the Reiff engine heating system, and the Garmin GNS-530 terrain databases this annual. While there are many things I'd like to put on the plane, cost is always an issue and I wanted to have money in reserve for those "unexpected" things the inspection would find. Sure enough, we did find some issues. Specifically:

Over the course of the inspection, I also made the decision to conduct the full Mooney Service Bulletin on tubular frame corrosion. Unlike most small GA airplanes, the Mooney is actually built around a tubular frame skeleton. The fuselage is actually bolted to the skeleton and serves to keep wind and rain out...but the tubular frame is what takes all the loads. Given the fact this plane was in Florida for so long, doing the inspection to get a baseline on the plane's condition seemed prudent. This was a big job because it involves removing the entire interior of the plane. Very labor intensive, but I was glad we did it. The tubular frame was in very good condition but we did find some areas with a bit of corrosion started and treated the areas as directed by the Mooney factory. I was also able to get a lot of pictures on the plane stripped bare including the tubular frame which will be good reference points for the future. At least now I know the plane's condition!

We also found a bit of fuel seeping from the tanks. Ended up replacing the gaskets where the fuel lines go into and out of the fuel tanks (sidewalls of the cabin). This was not a big deal to do since the interior was ripped out anyway. We ended up having to wait for some parts to come in and the corrosion inspection took almost a week to complete (including the treatment), so the annual ran almost a month and (as expected) went over budget. Ahh, the joys of airplane ownership....

Below are some photos showing the plane with all the cowlings/panels removed and some of the components you usually can't see! 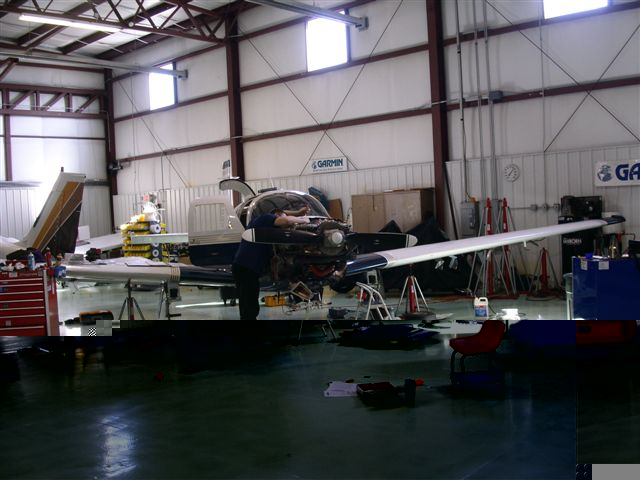 Plane up on jacks with the wheels removed!